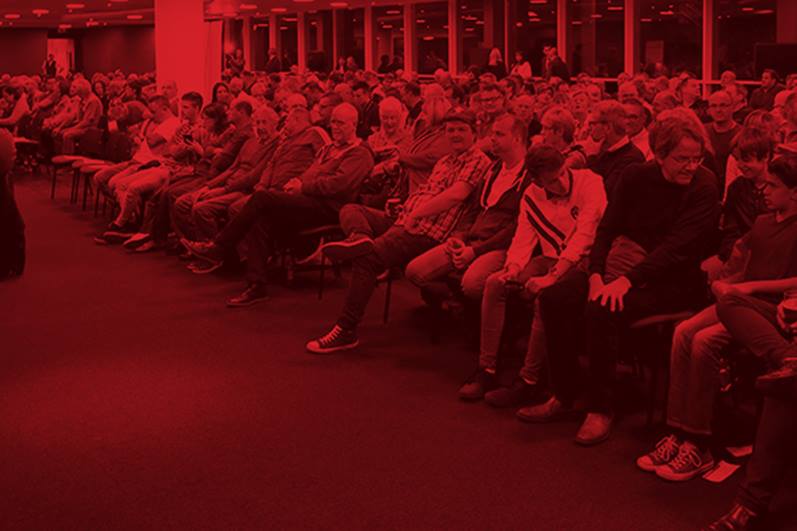 Saints Voice is a panel made up of 12 supporters voted in by fellow fans. The panel meet with club staff and officials several times each year to discuss a range of off pitch subjects covering all aspects of the supporter experience.

This allows the club to deepen its understanding of issues affecting fans, as well as giving us the opportunity to explain the thinking and processes behind important decisions that have been, or are being, made. Additionally, it is intended that the panel will provide a forum for supporters to share and discuss new ideas of their own for how to improve any aspect of their experience.

You can read minutes of full panel meetings, which include awaiting or completed actions.

Supporters also have the opportunity to engage with the panel and pose questions and provide feedback, contributing to the agenda in terms of subjects for discussion. To contact the panel please fill in the below enquiry form:

Bio
I started coming to watch the Saints when I was 7, eating pasties at The Dell with my dad. I worked in the ticket office for 2 years. Now as a season ticket holder in the Kingsland/Northam corner, I travel from SE London every game. I've followed Saints far and wide and would love to be able to represent other fans; their views & opinions. I'm particularly passionate about female supporters and changing the old fashioned view of women and football that I still come across. Southampton football club has been a big part of my family and I have immediate family members that are both homosexual and have disabilities. As a result I am keen to be a voice for other passionate Saints fans, and make sure that the club continue to strive to include all fans, and encourage them to march on together no matter their gender or story.

Bio
Originally from Andover, I went to my first Saints game in 1995 and have regularly attended from that point. I moved to the Midlands to go to medical school and have been working there ever since, currently as an inherited diseases doctor. I live in Birmingham and am therefore in the group of supporters residing in more distant parts for whom going to matches helps to foster friendships and family ties while maintaining links to the Saints community.

I applied to be on the panel to help encourage and preserve the aspects of the club that have been important to me over the years. Performance on the pitch is clearly the biggest driver to a positive experience for fans but how Southampton FC organise and present other aspects can also make a difference. In my view, the club should prioritise the promotion of vocal support and atmosphere (without manufacturing it) as well as making it as easy as possible for fans to attend by acting or lobbying on issues such as ticket allocation, fixture scheduling, and pricing of lower demand fixtures. I’m proud to be part of a fan base that, at its best, can fill grounds with an intense, inclusive and welcoming atmosphere and would use this opportunity to ensure that our ideas to encourage those moments are heard.

Bio
I have been a Southampton season ticket holder since the late 1980's so I certainly know about the ups and downs of being a Saints fan. I come from a family of Saints mad fans, I was only in my late teens then but have continued to support them through thick and thin. Together with my family which includes both of my parents, my brother and my children we travel down to Southampton from Fleet for every home game as well as a fair few away games. I believe that I have a good grasp on what’s important to a wide cross-section of the fan base. I would love to be able to have the opportunity to contribute new ideas and be a voice for our fans with the ultimate aim of improving Southampton Football Club and helping to strengthen its relationship with the fans.

Who I feel I represent
Families
The Chapel/Family Stand
Fans from ethnic minority groups
Members/Junior Saints
Fans who don't currently live in Southampton
Fans who actively make use of social media (forums; Twitter)

Bio
My name is Mark and I’ve followed Saints for nearly 40 years. During this time, I have experienced our ascension from League 1 back to the Premier League and European football, as well as the dark days that preceded that, in dropping down the divisions and heading into administration. I can proudly say I’ve been there to see us regularly beat the so-called ‘big boys’; miraculously escape relegation for season after season in the 90s; lift a trophy at Wembley; cheer special goals and, most significantly see my son lead the side out, as mascot. I’m always talking about Saints in some way and think Saints Voice could be a great way to channel some of the ideas and opinions I, and other fans, have! I’d love to be able to cover all things Saints, from beer to boardroom, and represent a broad cross section of our fans.

Who I feel I represent
Saints fans

Bio
Hello Everyone, my name is Yasmin. I am 28 years old and have been a Saints supporter since I could walk, as well as following all football - Worldwide. I am known as being the 'Optimist' as I can always see the positives in every situation. I use a lot of social media to enhance the reputation of our beloved Saints FC. I'm very open-minded, a good listener and its very refreshing to hear other people’s views and opinions. I am very analytical and will always consider the pros and cons of any situation and I am always open to change. I feel very strongly about every facet of our club and I would like to represent ‘all’ fans whether they are season ticket holders or ones who follow the club from home and certainly any fan who is not confident enough to express their thoughts and feelings themselves.

Bio
My first match was in February 1968, aged 8, standing on the Milton End with dad. We lost, but I was hooked, and have followed Saints everywhere since. Kingsland season ticket holder, with wonderful trips to Bucharest, Milan, Prague, Arnhem, Israel; perhaps slightly less wonderful trips to Carlisle, Hartlepool, Tranmere, Midtjylland! I love the Saints, but we don’t get everything right, and I will help Saints Voice bridge the gap that can easily grow between club and fans. I was a friend of Ted Bates, and met many Board members in that era. They loved Saints too, but often saw things differently to those of us on the terraces – I will help Saints Voice ensure the fan voice is very clear. I am a doctor who lives and works locally, talks constantly about Saints, and regularly speak at meetings, so can promise to strongly promote our views to the club.

Bio
Hi, I’m Tara .I’ve loved the club since I was a youngster & have attended many games home, away and overseas. I am 53 and a season ticket holder in the Northam Stand. Having a fantastic day out with my friends & fellow supporters, good facilities & resources and having regular communication from my club is important to me. Over the years I have been lucky to meet so many fantastic Saints supporters at home, on the road and through social media and look forward to linking with more. I am approachable, a good listener and if voted onto the panel will take forward your comments, issues & ideas to maintain & improve our supporter experience as well as share with you any future plans decided by the club. I look forward to representing you as part of the Panel so together we can have the best fan experience supporting our beloved football club! 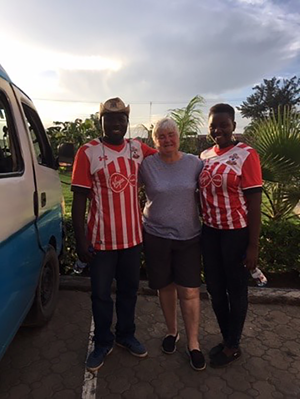 Bio:
My father and brothers were season ticket holders at Dell. I went to my first match aged 11 when we moved back to Southampton.

I plan to relay opinions and suggestions on things we discuss as fans - quality of food and drink, prices of everything, connectivity in stadium, stewards performance, plus lots more. I like to see transparency in all things. 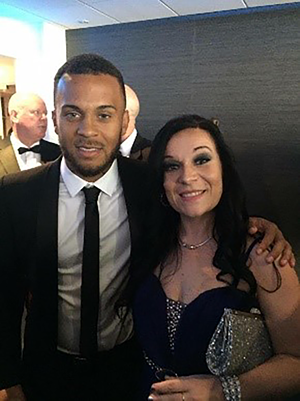 Bio:
I’ve supported the club since I was 7 years old when my dad took me to my first game. I have been a season ticket holder since I was 10 years old and have traveled up and down the country attending away games, as well as travelling to Europe.

I can represent Saints from a family point of view. My teenage girls love attending games with me and I feel I can have good input in regards to helping maintain the club's family feel. I engage with a lot of our fans in person and on social media also.

Bio:
I’m a football fanatic and season ticket holder, attending virtually every game, home and away. I’ve been involved with women’s football both playing and as secretary for nearly 24 years, and a league fixtures secretary, so have a well-rounded view of the game.

Football should be accessible all with no discrimination. Communication is vital, must be clear, concise and regular. I’m a good listener, patient and approachable. so perfect skills to be a part of Saints Voice. 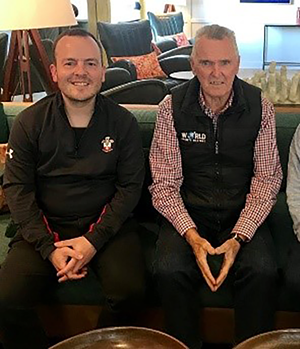 Who I feel I represent:
Supporters with a keen interest in Saints History
Supporters on a low income
Disabled Supporters

Bio:
I currently run the supporters group 'Saints Archive' and do regular podcasts with Total Saints Podcast. Been supporting the club since I was 13. I am a champion for Saints FC History Fans, and lower income Disabled Supporters. 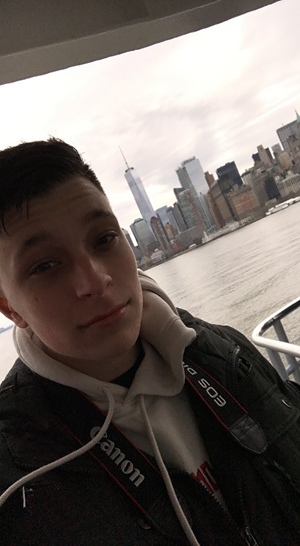 Who I feel I represent:
Supporters in Itchen North
Supporters travelling away
Vocal Supporters

Bio:
I have been a Saints fan since birth and have attended almost every game since my first one in 2006. I have in that time managed over 50 away trips too. In February 2011, I also had the privilege of being a Saints mascot. I represent young adult Saints fans and want to encourage the next generation of Saints fans by getting them to St Mary’s.

You can manage the different ways that we might communicate with you by following the ‘update preferences’ link in the emails you receive from us.

You can withdraw you consent to receive communications from us at any time. The easiest way to do this is to click the ‘unsubscribe’ button at the bottom of all emails you receive from us.

Where to find information