Will Smallbone is back in full team training after eight months on the sidelines, Southampton manager Ralph Hasenhüttl has revealed.

The 21-year-old midfielder suffered a serious knee injury in the Premier League meeting with Leicester back in January, and has been working hard on his recovery ever since.

Now he is pushing to feature in competitive action again, along with fellow Irishman Shane Long, who missed the goalless draw with West Ham after testing positive for Covid-19.

“The positive thing is that Will is in the team session the whole week now, he looks good and is very happy that he’s back on the training ground with the team,” Hasenhüttl said.

“Longy is also back in the squad since yesterday, but Walcott and Armstrong are still out with injury, so it will take a little bit of time to come back for them.”

The boss is pleased to have a number of options at his disposal for the game at the Etihad Stadium, and may choose to make changes to his starting line-up.

“A few players are ready for a start,” he added. “The good thing for me now is I have a choice, which is what I didn’t have last season.

“Last season when you were fit you played, but now we have a lot of qualities that we can try. It’s not so much about who deserves to play, it’s more about what you need to play.

“This is what I told the players today: sometimes it looks a little bit unfair in the future when you’re not playing because you did a good job in the last game, but when you need something different against this opponent we now have the opportunities to change, and this is what we need.”

Manager confident that team shape and defensive stability are both key to winning games. 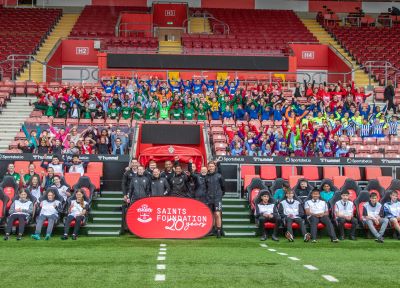