Saints Foundation and Eastleigh Football Club Community Trust (EFCCT) are delighted to have reached an agreement for EFCCT to run the Para Football League moving forward.

The new season of the Para Football League will kick off in September as part of Eastleigh FC Community Trust’s hugely successful work supporting disability football across Hampshire.

Saints Foundation has enjoyed running the Para Football League for the past 5 years, providing young people and adults with disabilities with the opportunity to play football competitively in an inclusive environment.

Following discussions with local partners, including Hampshire FA, Saints Foundation has reached an agreement to cease running its league and support EFCCT with the creation of a new Para League, which will be best placed to support its players as competitive disability football continues to grow in popularity.

Saints Foundation continues to work with people with disabilities in other ways, including its long-standing SaintsAbility project, and will support EFCCT with continuing work to make the Para Football League a bigger and better success than ever.

Gazz Davison, Head of Community at EFCCT, said: “I want to say a huge thank you to Saints Foundation for the provision they’ve provided for the Para League over the last 5 seasons.

“This is a very exciting time for EFCCT as we take the reins of what has been a very successful league over the years. Our aim is to continue making sure that every player enjoys their football and gets the most out of playing as a team.

“Having spoken to a number of existing member clubs, a provisional plan has been put in place which will ensure everyone has say in how the league is to be run moving forward. We know that every club has the same goal – to get everyone playing football.”

Greg Baker, Head of Saints Foundation, added: “It’s been a huge privilege to watch the Para Football League grow and succeed over the past 5 years. I know that this incredible league will only continue to flourish with EFCCT.

“Saints Foundation looks forward to continuing to support EFCCT and the league as it starts this exciting new chapter.”

For more information going forward, please contact Gazz Davison via email at gazz@eastleighfc.com or via phone at 023 8061 3361.

To find out more about Para Football, please visit the FA's website.

take part in our saintsability raffle 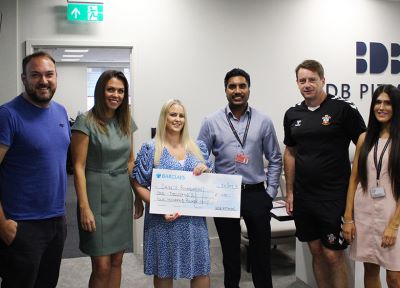 Fourth round tie to be played in October.