Saints Foundation’s Futsal Scholarship Programme has celebrated its first ever elite trophy, with its first-year team bringing home the title in the South East Division 1 league.

The accomplishment is reward for what the programme has been working towards since its inception in 2011, and underlines the continued progression of what is swiftly being recognised as one of the top futsal and education programmes in the country.

To cap off the feat of picking up their maiden elite trophy, the scholars also remained unbeaten throughout the entire season, racking up 34 goals and only conceding ten, making it to this week’s national finals, in Birmingham.

The team is coached by Andy Powell, who was named a Premier League Kicks Hero this year after coming through the Kicks programme to participate in the futsal scholarship, before moving on to become a full-time coach.

The team is a prime example of the clear pathway that is on offer to scholars within the Foundation, with five out of the seven players who won the title also regularly training with Foundation’s National League side.

Andy said: “The team’s hard work and attitude in training has been unbelievable and they should be very proud of what they have achieved so far.

“I am glad that I could pass on my experience and coaching style and enable them to achieve success.”

It is not the only success for Saints Foundation’s Education in Football and Futsal Development Programme.

A total of 32 students are set to graduate with a BTEC Level 3 National Diploma in Sport this summer.

Caitlin Collighan is one of ten girls who started out with the Foundation in 2015 as part of their very first intake on the Ladies Futsal Scholarship, and she said: “Throughout the two years of being on the scholarship I have been able to develop both through education and on the futsal court.

“I have surpassed my target grades which has given me the opportunity to now go on and further my education at university.”

Caitlin this season finished as the leading goalscorer in the Ladies National Futsal League and also received an invitation to trials for the Northern Ireland Ladies Under-19 team.

“Winning the top goalscorer award for both the Ladies Futsal National League and Cup is a huge honour for me,” she said. “Through playing Futsal I feel it has developed my 11 a-side game also and helped me to achieve international recognition with Northern Ireland at under-19 level – this I something I am extremely proud of.” 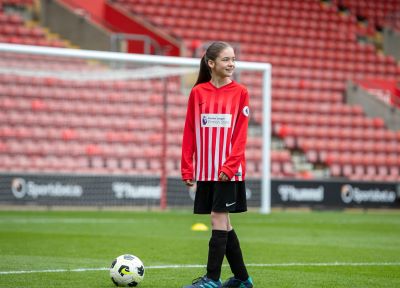 As the Premier League turns 30, we're also celebrating its amazing work off the pitch.

15 hours ago
On This Day

On This Day: Slick Saints hit five at Ipswich

Nigel Adkins's side produced a masterclass at Portman Road in 2011.